For 69 days from Aug. 5 until Oct. 14, 2010, the world waited anxiously to learn the fate of 33 copper miners trapped 700 meters (2,300 feet) underground in Copiapó, Chile. When, one by one, the men were finally hoisted slowly to the surface in a specially designed escape capsule, they were breathing oxygen supplied by four Luxfer 1-cubic-meter cylinders donated by Indura Chile, a long-time Luxfer customer.

It took nearly two days to bring out all the men, who had endured the longest underground entrapment in human history. They ranged in age from 19 to 63. One miner was from Bolivia, and the rest were from Chile.

For the first two weeks after the disastrous mine collapse, the men were feared dead. But when drilling reached them, rescuers were astonished to find that everyone was alive and in surprisingly good condition. Then commenced one of the most intense and dramatic rescue operations ever conducted.

A shaft was carefully drilled to hold the 3.95-meter-high (13-foot) cylindrical steel rescue capsule that was just wide enough to hold one man. Named the "Fénix" (in English, "Phoenix," after the mythical bird said to rise from its own ashes), the capsule was fitted with an oxygen tube connected to Luxfer cylinders made from Luxfer's patented L7X® higher-strength aluminum alloy and filled to 3,000 psig. The capsule was painted white, red and blue, the colors of the Chilean flag. Each miner wore a helmet equipped with an intercom to stay in contact with rescuers on the surface.

As the first miner, Florencio Ávalos, emerged safely from the capsule, Chilean President Sebastian Piñera was there to embrace him and say: "Welcome to life." It was a statement he was to repeat many times as each miner ascended.

After receiving his presidential hug, the second miner to be rescued, Mario Sepulveda, became a national celebrity when he began exuberantly punching the air and passing out souvenir rocks to rescue workers. The Chilean press promptly dubbed him "Super Mario."

The final miner who rode the capsule was Luis Urzúa, a foreman who had courageously volunteered to go last. He stepped from the capsule at 9:58 p.m., Chilean time.

"This will be recorded on every single Chilean heart forever," President Piñera said.

Kathryn Gamboa, Luxfer Gas Cylinders Sales Manager for South America, commented: "We are very proud that Luxfer cylinders were used in this historic rescue, and we are grateful to our colleagues at Indura Chile for the important role they played."

Based in Santiago, Indura is a major manufacturer of industrial and medical gases and welding equipment and supplies. In addition to its Chilean business, Indura has operations in Argentina, Colombia, Ecuador, Peru and Mexico. 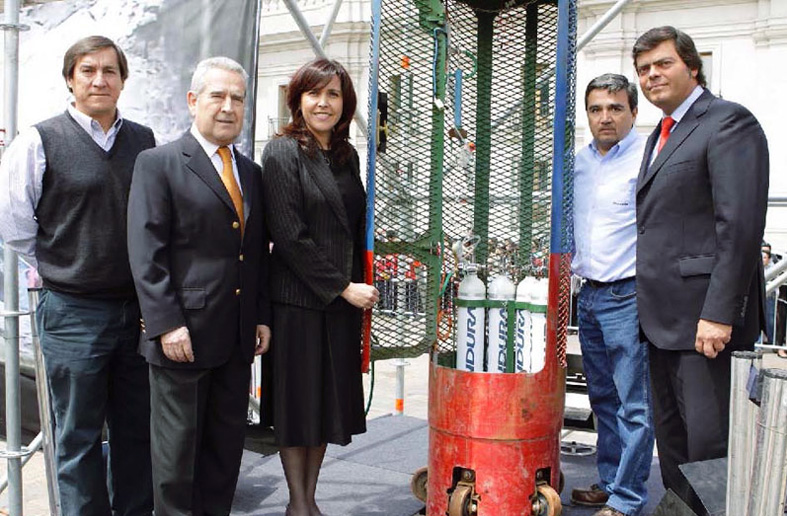