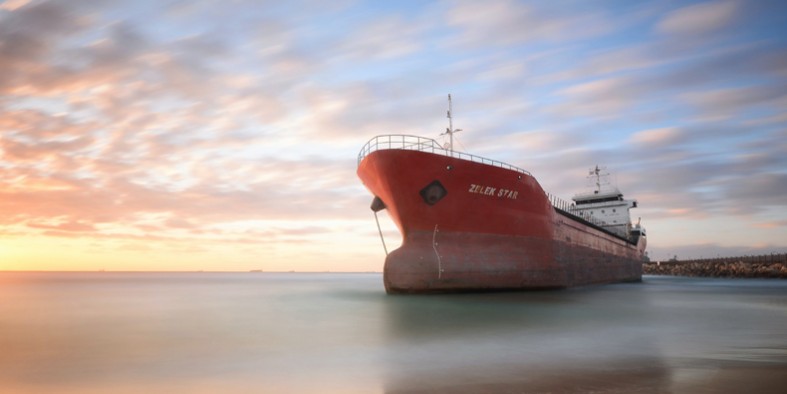 Ships are currently responsible for 3% of all greenhouse gases. This might not seem high, but this is projected to grow by up to 50% if the shipping industry continues on its course. Other transport industries such as automotion, public transport and rail have already made significant steps towards cutting their reliance on fossil fuels, so it only makes sense for maritime vehicles to follow suit.

Fortunately, there is a lot of opportunity for alternative fuels to flourish in this industry, hydrogen being one of the main contenders. In 2017, the world’s first self-sufficient hydrogen-powered boat was launched, and innovations in boat design have continued to develop.

What is a hydrogen powered boat?

A hydrogen powered boat uses hydrogen as a source of energy to drive an electric motor. The on-board hydrogen fuel system draws hydrogen from storage cylinders into fuel cells, where the hydrogen is converted into energy. This energy feeds into a battery pack which in turn powers the motor. 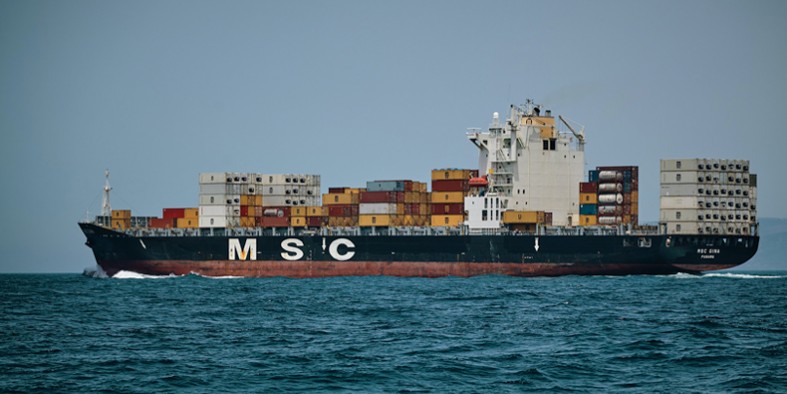 What are the benefits of using hydrogen as a fuel for ships?

There are several propulsion methods that can be used to power ships. Of course, the greenest, cleanest method is wind power, used by sail boats. However, this option is not viable for commercial shipping vehicles because of its slow speed and unreliable nature.

Hydrogen has a number of benefits over alternative fuel sources, including:

What are the challenges of using hydrogen as a fuel for ships?

The biggest challenge to overcome when it comes to rolling out hydrogen fuel solutions across shipping worldwide is storage. Because ships are not able to refuel at sea, large quantities of hydrogen must be stored on board at controlled temperatures. This takes up a lot of space, which may limit the amount of cargo ships can carry.

The good news is that there are solutions... 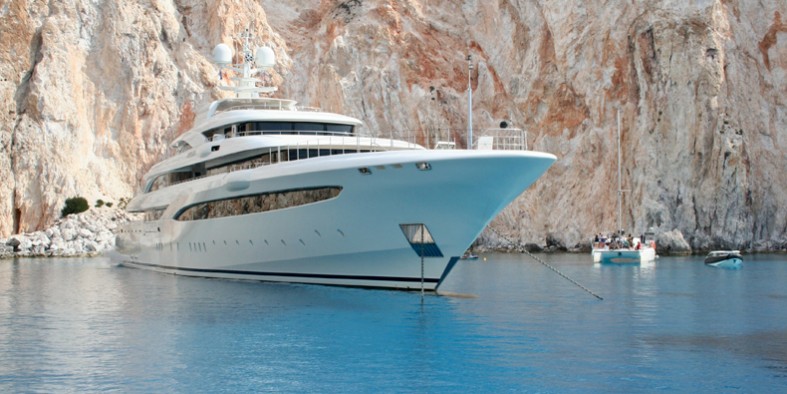 Currently, most of the world’s hydrogen is produced using fossil fuels. Obviously, this is not desirable for long-term global hydrogen usage. While hydrogen enables the vehicle itself to be zero-emission, the production chain still has a carbon footprint.

Fortunately, there are some alternatives.

The first is electrolysis. The crucial thing about this method of hydrogen production for shipping is that it can be done on-board, using wind and solar energy to create hydrogen on the go. This means that a ship equipped to produce its own hydrogen needs a much smaller space to house the hydrogen storage cylinders, and can ultimately become self-sufficient in terms of fuel.

Another option is to convert the hydrogen into ammonia for storage. Ammonia takes up much less volume than hydrogen, and does not require cryogenic storage. The ammonia can be converted back to hydrogen on-board. Ammonia is toxic to humans and sea life, so extra care must be taken if using this method.

This is by far the biggest sector when it comes to maritime emissions, and therefore presents the greatest challenge to hydrogen conversion. Research has shown that hydrogen is nonetheless a viable fuel source for shipping.

The chance of success depends on several factors, from government regulations and funding to the technologies available. One report has found that the shipping sector could feasibly completely decarbonise by 2035 using a range of green technology solutions, including hydrogen.

Scalability is a problem for large shipping vessels, as the entire fuel system must be scaled up to produce enough power for large ships. This potentially cuts into storage space and produces additional logistical considerations. That said, a study by the ICCT has concluded that hydrogen fuel systems could be incorporated on-board cargo ships with minimal disruption to normal service if done efficiently.

Thus far, wide-scale prototyping aboard commercial shipping vehicles is in its infancy. But all players agree that conversion to green fuels is essential in order to meet global carbon emission goals.

Meanwhile, smaller ships are being used as test subjects for hydrogen fuel with a great deal of success. 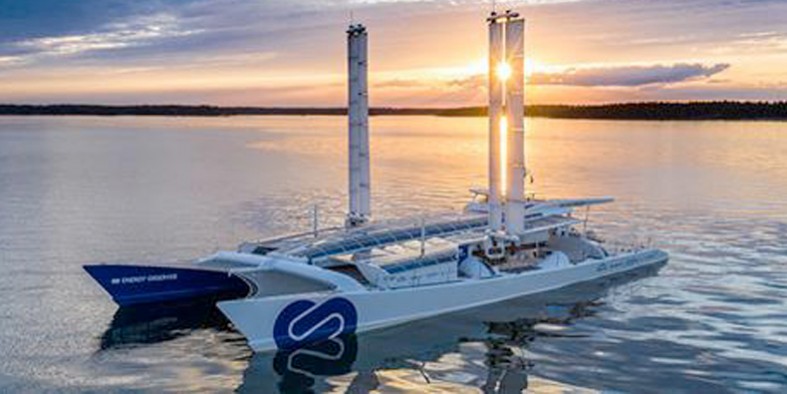 The Energy Observer is the world’s first hydrogen fuel cell boat, launched in 2017 and carrying Luxfer hydrogen cylinders on board. It is essentially a floating laboratory, designed not only to use green fuels, but also to perform research into advancing ecological solutions across a range of applications.

The boat is equipped with state-of-the-art wind turbines and solar panels, which allow it to produce its own hydrogen fuel using electrolysis of salt water.

On board it has 200 square metres of solar panels, 1500kg of batteries, tanks for 63kg of hydrogen, electric motors, solid computer-controlled “ocean wing” sails, and a desalinator and hydrogen generator to refuel the hydrogen tanks.

The boat can be powered by wind, but when there is none, it draws on its hydrogen supply for power. This supplies the boat with motive power and cabin power for heat and electricity. When there’s wind, the solar panels recharge the batteries and make new hydrogen. It’s a highly efficient and completely sustainable design, paving the way for more vessels to adopt this technology.

Yachting relies heavily on fossil fuels. A superyacht is one of the most carbon-intensive vehicles on the planet. Therefore, moving the luxury leisure yacht industry towards alternative fuels is key to meeting global carbon goals.

It’s recently been speculated that Bill Gates has purchased a hydrogen powered superyacht, and research in this field is showing that hydrogen is a viable option.

A number of manufacturers are working on designs that promise to make recreational yachting a much greener activity, including Yanmar. In collaboration with Toyota, they are embarking on the development of a hydrogen boat fuel cell. The design is based on the technology already at use in Toyota’s hydrogen car.

Meanwhile, Dutch design studio Sinot Yacht Architecture & Design has been working on a liquid hydrogen yacht prototype. Aqua is a 360 foot superyacht, and was presented at Monaco Yacht Show in 2019.

Industry specialists are predicting that these prototypes will pave the way for a widespread roll-out of hydrogen leisure craft, which could become a realistic commercial proposition within 3 to 5 years. 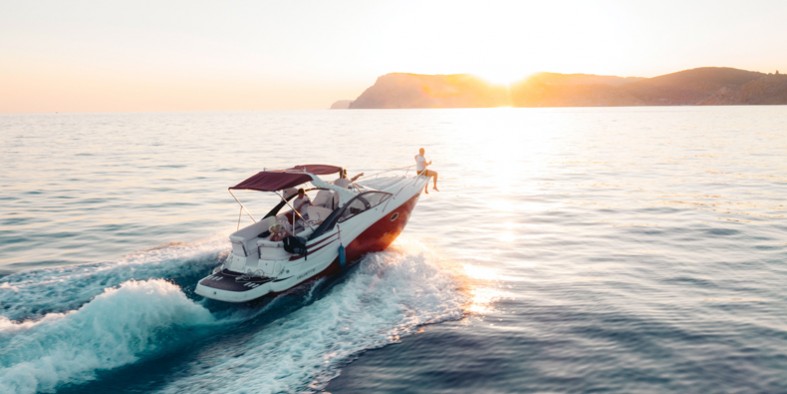 What part does Luxfer play?

Switching maritime vessels to alternative fuels is essential if we are to meet global zero-emission goals. Research suggests that complete decarbonisation of the industry could be achieved by 2035. Hydrogen is proving to be a major contender in this arena, although it does not come without its obstacles.

Research and technological innovation are already making inroads, and positioning hydrogen as the go-to fuel for commercial shipping, research and recreational craft. One of the major challenges is designing a way to safely and efficiently store hydrogen on boats without compromising storage space.

At Luxfer, we’re at the forefront of this movement, developing products designed to meet the challenges faced by maritime industries. From our G-Stor H2 carbon composite cylinders to complete hydrogen fuel storage systems, we’re leading the way in progessive product design - and we’re excited for what the future holds.